India imposed new strict rules on Facebook, Twitter, YouTube and other social media sites weeks after there was an attempt by the country’s government to force Twitter to ban certain accounts which were deemed provocative.

The rules require all the social media platforms to appoint a) a compliance officer, whose job would be to ensure that their platforms follow all the local laws, b) a grievance officer, who would address complaints from the local citizens about their platforms, c) a contact person available to Indian law enforcement all the time. They would also be required to make reports stating the complaints they received and how they handled them.

They will also be asked to take down certain posts especially the ones which feature full or partial nudity, asexual act or impersonation through morphed images.

The larger social networks which will be defined on the basis of the number of local users will have 3 months to implement the required policies, while the smaller ones are required to do this immediately.

One of the major reasons for setting up these rules is Twitter restored several accounts it was supposed to remove for posting content which they deemed provocative and baseless. These included hashtags related to farmers’ protests against the new Agriculture Bills. The platform had to take down hundreds of accounts but somehow refused to take down the accounts of journalists, politicians and activists. 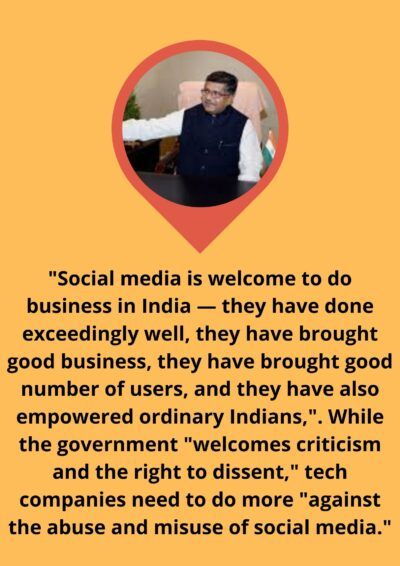 Google, the owner of YouTube did not respond to the requests for making a statement.

A few of the other provisions in India’s rules could prove to be a little more complicated, particularly to find the “first originator” of problematic or defaming or hate spreading messages or posts that go viral. Facebook refused to fulfill this requirement in the recent past stating that it would break its policy of end-to-end encryption.

Ravi Shankar Prasad also called out how Twitter handled a similar situation in United States very differently during the Capitol Hill Riots on 6th January,2021. The Indian government criticized Twitter for taking immediate and quick action against many accounts following the Capitol Hill riots but did not take any such initiatives after the violent protests of the farmers in New Delhi during which many police inspectors were injured.

“If there is an attack on Capitol Hill in Congress then social media supports the police action, but if there is an aggressive attack on Red Fort, the symbol of India's freedom … there is a double standard," he said. “This is unacceptable."

Later, Twitter said it was going through the rules. “We look forward to continued engagement with the Government of India to strike a balance between transparency, freedom of expression, and privacy," a company spokesperson told CNN Business. “We believe that regulation is beneficial when it safeguards citizen's fundamental rights and reinforces online freedoms."

There is no denying the fact that India is the biggest user of all these platforms after China, of course, but the government has shown a continuous tendency to restrict, control or even ban them over the years.

What is your opinion about the new policies imposed by the Indian Government? Are you in favor or against? Let us know in the comment section below.

3 Ways in Which Branding Impacts Your SEO and ROI